When it comes to mitigating climate change, education is key. The more people are aware of the wide-scale impacts of a changing climate, the more can be done to mitigate the effects. CEE Bill Alliance Team recently invited Prof. Philip Warren - an ecologist from Sheffield University - to talk about land management for adaptation to the impacts of climate change. He discussed some important issues related to flooding, increases in which are likely to be one of the consequences of altered weather patterns resulting from climate change. In particular, he focused on the approach known as “natural flood management” (NFM).

Flooding can occur in different contexts. Coastal flooding typically involves combinations of drivers, such as tidal cycles, storm surges, and, of course, changes in sea level, but the focus of the talk was on flooding caused by rivers when the water trying to flow down a river exceeds the capacity of the channel and overflows into the surrounding landscape. Such flooding is a natural event, that can, in some circumstances, even be beneficial to agriculture - where floodwater deposits fertile silt containing organic matter and nutrients onto the surrounding land. However, flooding often conflicts with human activity, causing significant damage and disruption, and with the prospect of increased frequency and magnitude of flooding, such impacts are a huge concern.

Climate change is having a significant impact on weather events. In the UK, average rainfall is not predicted to change enormously but it is likely to become dryer in summer and wetter in winter along with more intense rainfall events - causing more frequent and ferocious flooding. In addition, modification of landscapes due to urbanisation further worsens the situation. In urban areas, where porous soil and vegetation is replaced with impervious surfaces such as buildings and roads, heavy rainfall is rapidly directed into drains and waterways causing more intense peaks of discharge.

While the problem may be becoming worse, flooding disruption is not new and humans have invested huge efforts into preventing and managing flood risk. Traditionally, prevention consists of ‘hard’ engineering methods which increase the volume of water in river channels, such as barriers, raised banks, and channel straightening and deepening. Unfortunately, problems arise with these methods as they often exacerbate the problems downstream - changing the location of flood events rather than preventing them. As a result, there is increasing interest in techniques that work with natural processes and enhance the ability of landscapes to reduce flood risk whilst simultaneously enhancing biodiversity – natural flood management.

NFM involves lots of different types of management in a catchment, primarily focused on reducing peaks of river discharge by slowing the rate water moves off the land into the river and spreading the flow over a longer period. This can be accomplished in a range of different ways, in various parts of the catchment, as illustrated below. 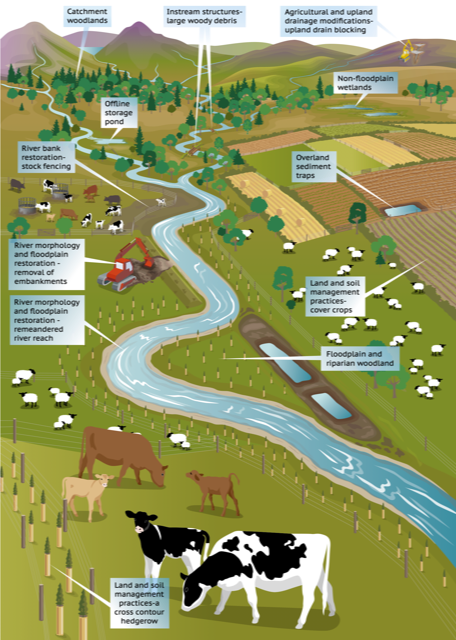 The main purposes of these interventions are to:

If NFM is executed effectively, and on a large enough scale across a catchment, it should help provide effective mitigation for at least some of the increases in flooding predicted as a result of climate change. Current research suggests, however, that even though it is effective it may not be the entire solution, particularly for much larger floods. So, is it still worth doing? One important consideration here is that most, if not all, of the different interventions associated with natural flood management, also have the potential to be very positive for biodiversity and habitat variety. Planting woodlands, creating wetlands, improving soil, conserving hedgerows, all these are things which bring a wider suite of benefits to wildlife and people. So, it is important to recognise that actions associated with NFM will both help to mitigate some of the risks from flooding and at the same time benefit biodiversity; reflecting a key principle of the CEE Bill itself: environmental problems and their solutions should not be seen in isolation.